This isn’t really related to building a Spacecraft replica but it does show a little background. I built the Kitfox in 1997 and have flown it all around the country. I built the Biplane from scratch over a period of about 4 years finishing it in 2006. People get a kick out of seeing it in the living room. I have a GREAT wife! That is my good friend Mark M. welding in my living room! Did I mention I have a GREAT wife!

Before I get a ton of grief for safety, we had a fire extinguisher standing by and Mark covered his legs with the towel you can just see in the foreground. We were only tacking the exhaust in place so we could take it outside to finish. The plane spent about a month in the living room for final rigging and wiring. It was much cooler than outside. I was doing final wing work in the garage. It was 115 outside the day we worked on the exhaust (Phoenix). 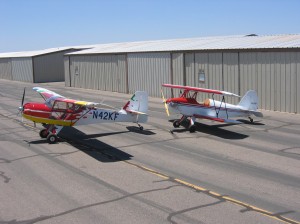 The TG-8 is a 1/5 scale Flying model I built. I want to build a full-size replica and thought this was a good place to put a photo 🙂

A few more biplane photos for another builder… 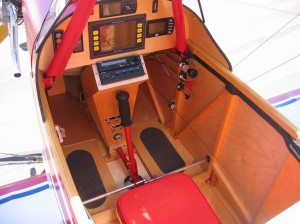 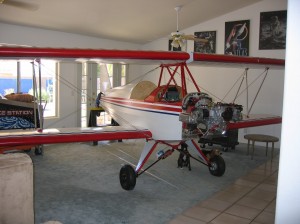