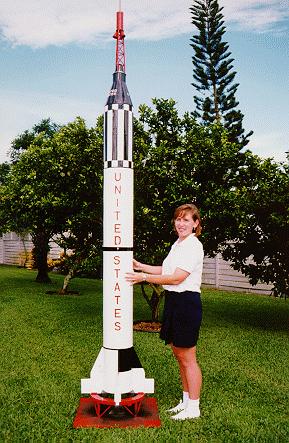 Here is a set of plans to build a 1/8 stand-over-there-scale Mercury Redstone. The original model was built in just a few days to try out some unique construction techniques. It was fun to fly even though it didn’t go very high. Again, it was trying out some new stuff including some homemade parachutes. It could easily be detailed more and a better capsule could be made. All the technical info is in the plans set.

These plans were originally done in 1995  and were once offered for sale in rocket magazine ads before the internet was really popular. The model can be built for less than $100 and makes a great display or flying model rocket. The plans could be scaled down to build a smaller version. The techniques could also be applied to other scratch built rocket.

About 30 sets were sold. I never saw any photos or heard of anyone flying one other than the prototype so if you build one, please send some photos. We’ll certainly post them on this site for others to enjoy. Some of the files are large (PDF) so be patient when downloading them.

Here is a video of the prototype flying around 1995. The first is the H flight and the second is the I flight. There is more discussion in the manual.